How The Grinch Stole Christmas is a beloved book by the iconic Dr. Seuss.

This classic children’s book has thrilled readers young and old for decades, and its popularity isn’t decreasing as time goes by.

The Grinch himself has become an iconic character that is instantly recognizable around the world, and he has featured in countless films, TV shows and even video games!

Moreso, he has become a symbol for people who are grouchy around Christmas, even though in the end he learns to appreciate it.

If you love this classic tale, then this guide on how to draw the Grinch will provide some festive fun to your day! 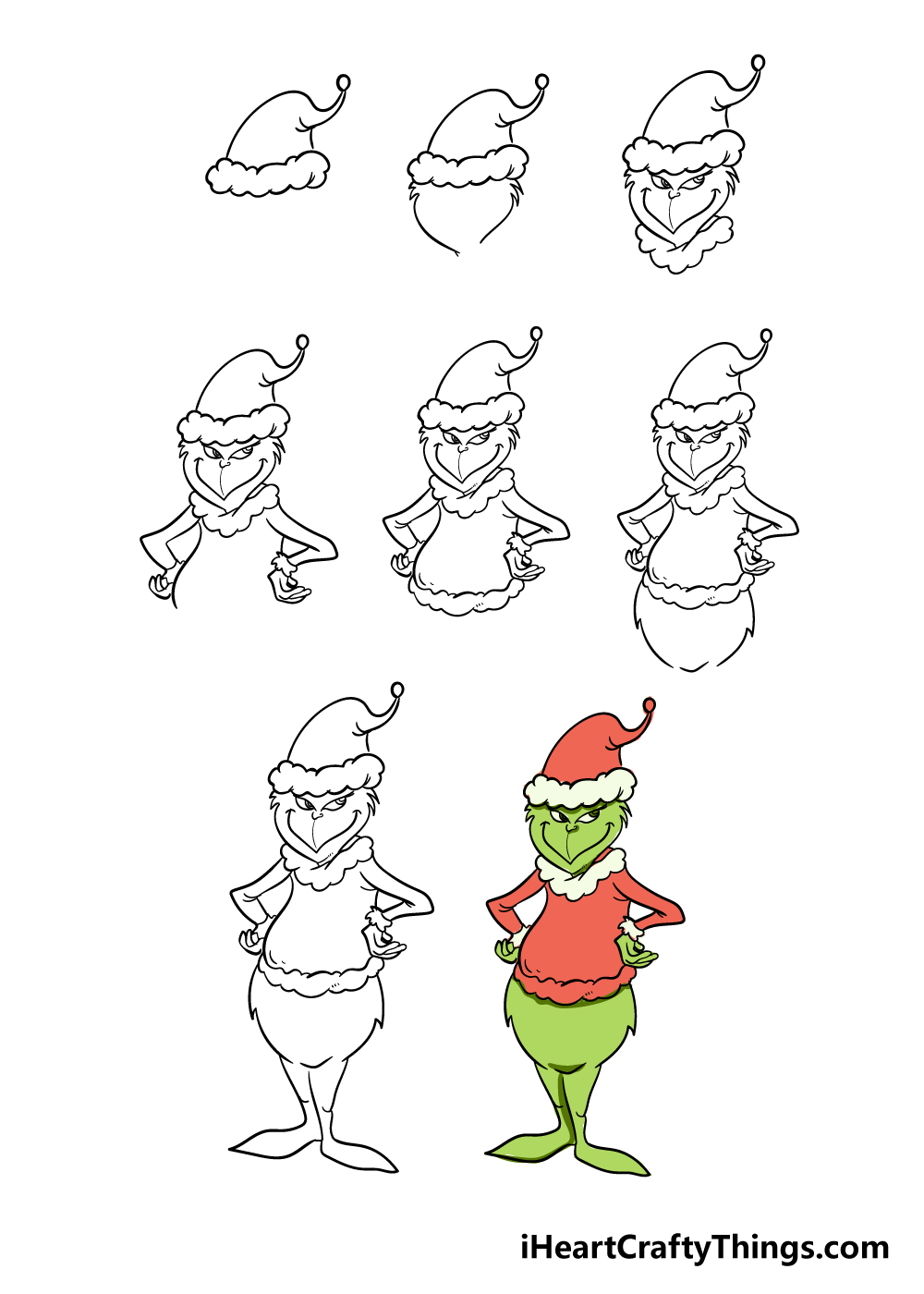 How to Draw the Grinch – Let’s get Started! 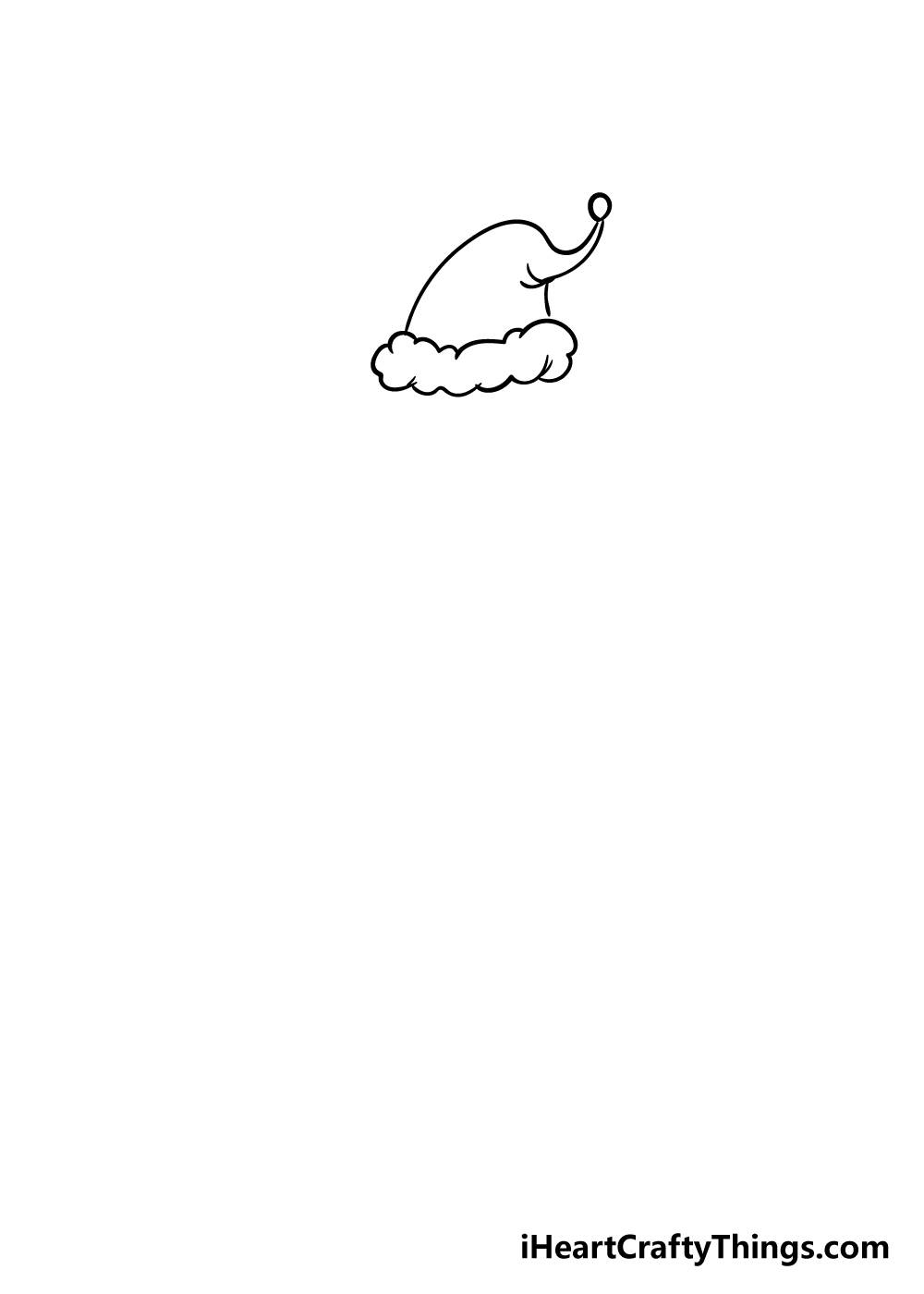 In this guide on how to draw the Grinch, we shall be portraying him in his classic Santa outfit. The first element will be his Santa hat, so let’s start that now!

To draw this hat, use a bumpy, curvy line to create a thin oval that will form the fluffy base of his hat.

Then, use a curved line coming up from that to form the top of the Santa hat.

Try to keep the tip of the hat quite thin as you draw, and then include a tiny bobble at the end of the hat.

Step 2 – Start with the Grinch’s head 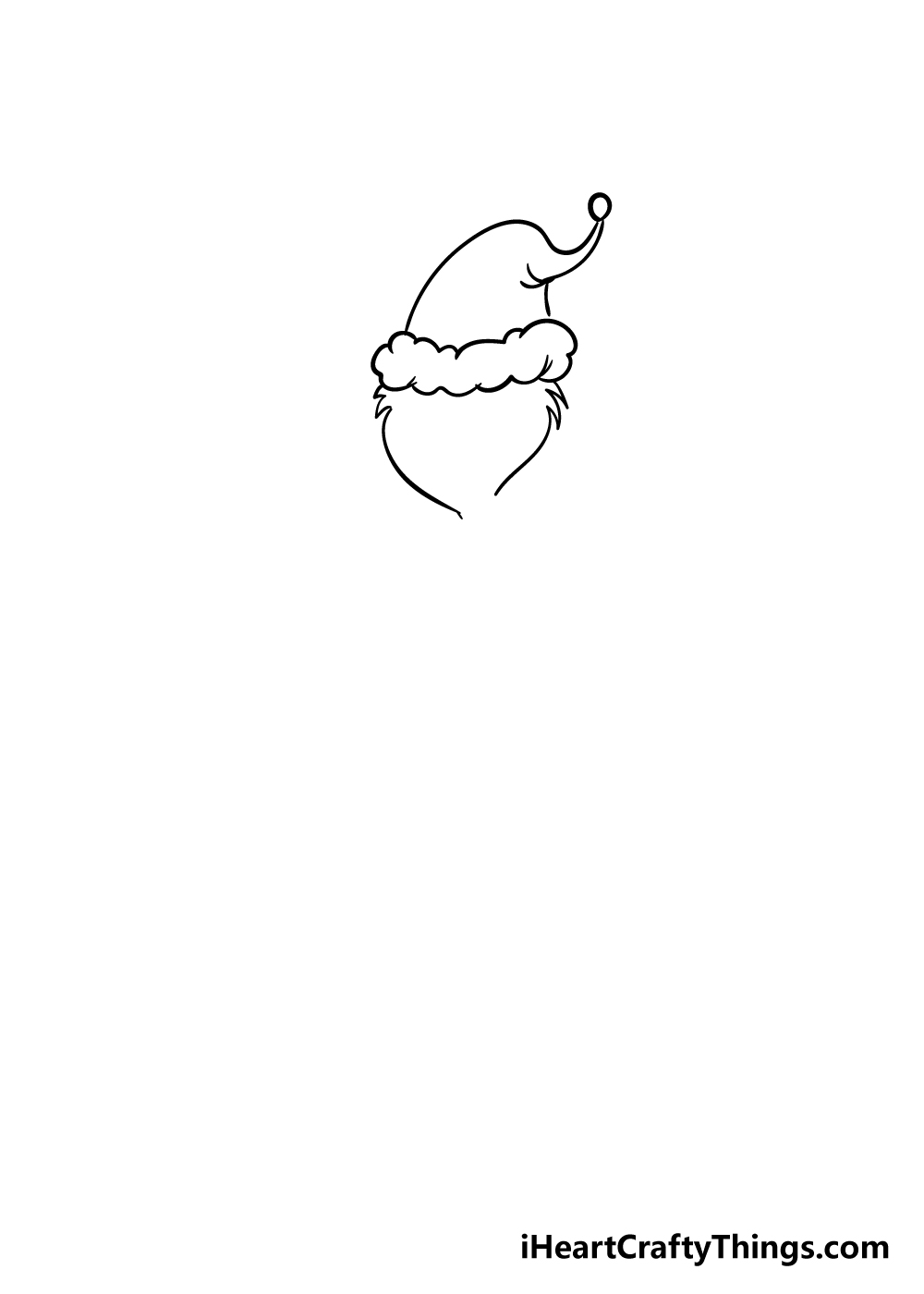 You’ve drawn the hat, so now we shall begin on the head of your Grinch drawing. First, draw some sharp, jagged lines at the corner of the base of the hat, this will show some of his fur poking out from the hat.

Then, draw a curved line going inwards from these tufts of fur with a small gap between them at the end.

Step 3 – Next, start on the face of the Grinch 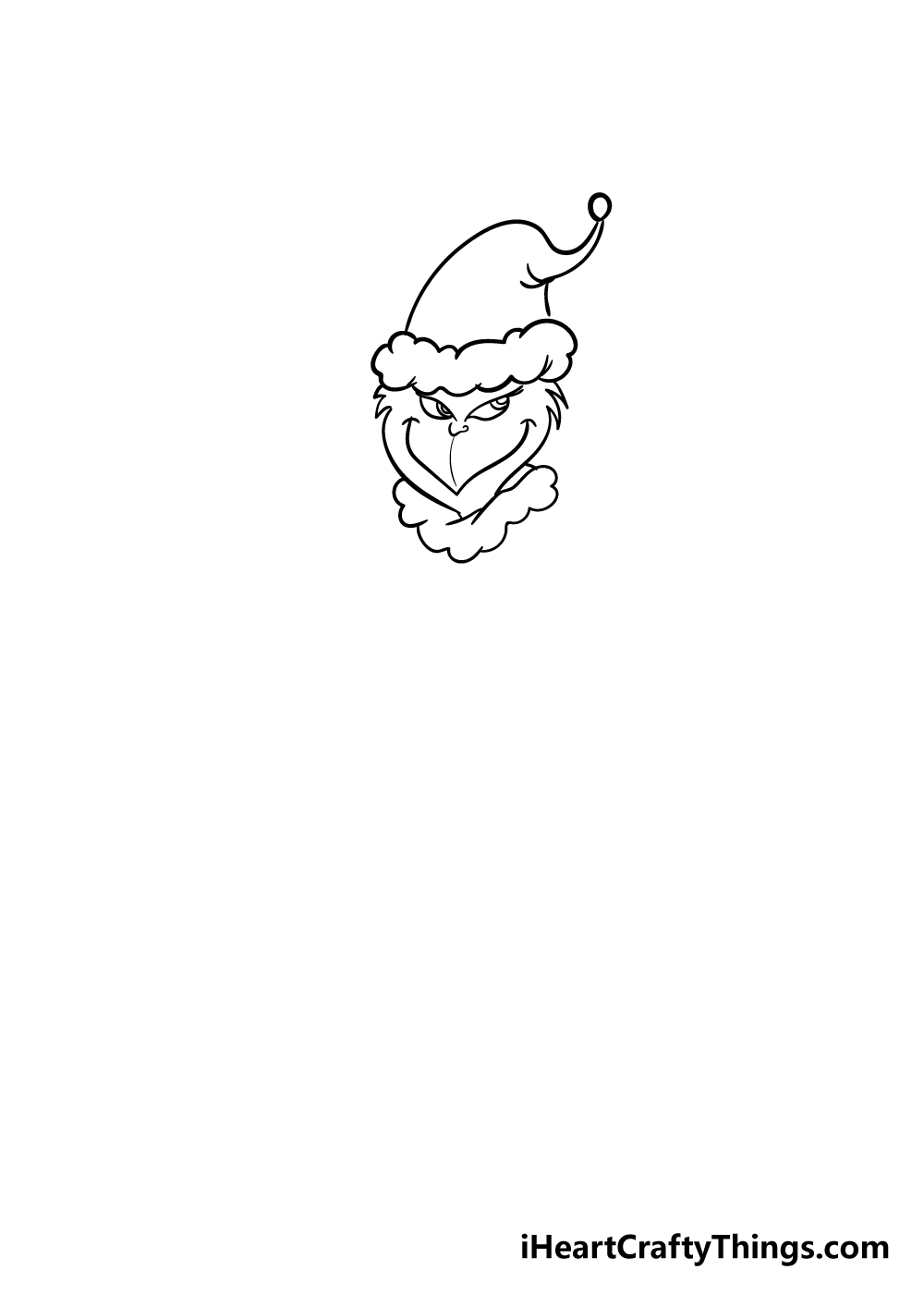 Dr. Seuss has a very specific style, especially when it comes to faces. The Grinch’s face has some sharp lines and angles to it, and his eyes will be angled downwards to give him a menacing expression.

His nose will be quite small, with a line going down from it. Finally, his mouth will go beneath that line, and it will be made of a curved line with a sharp point in the middle.

Finally, you can draw a section under his neck that looks similar to the base of the hat. This will form a fluffy collar for the Grinch’s suit. 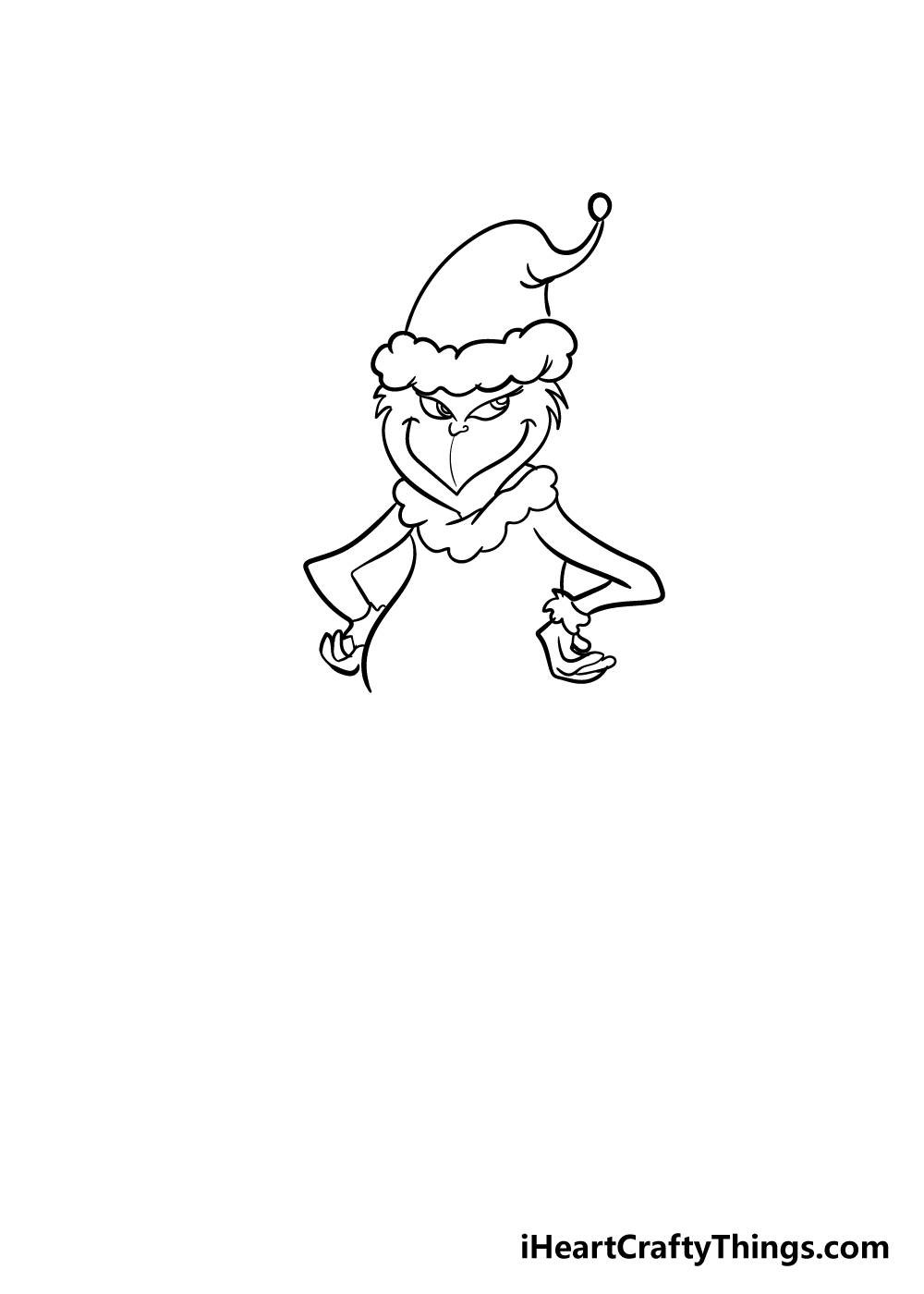 The Grinch always looks like he’s scheming about something, so to show this we will have his arms at his sides.

His arms will come out directly from his collar, and will be drawn with some curved, angular lines ending in his hands.

His belly will then be drawn with a wavy line coming down to give him a bit of a potbelly.

Step 5 – Draw the belt and some details 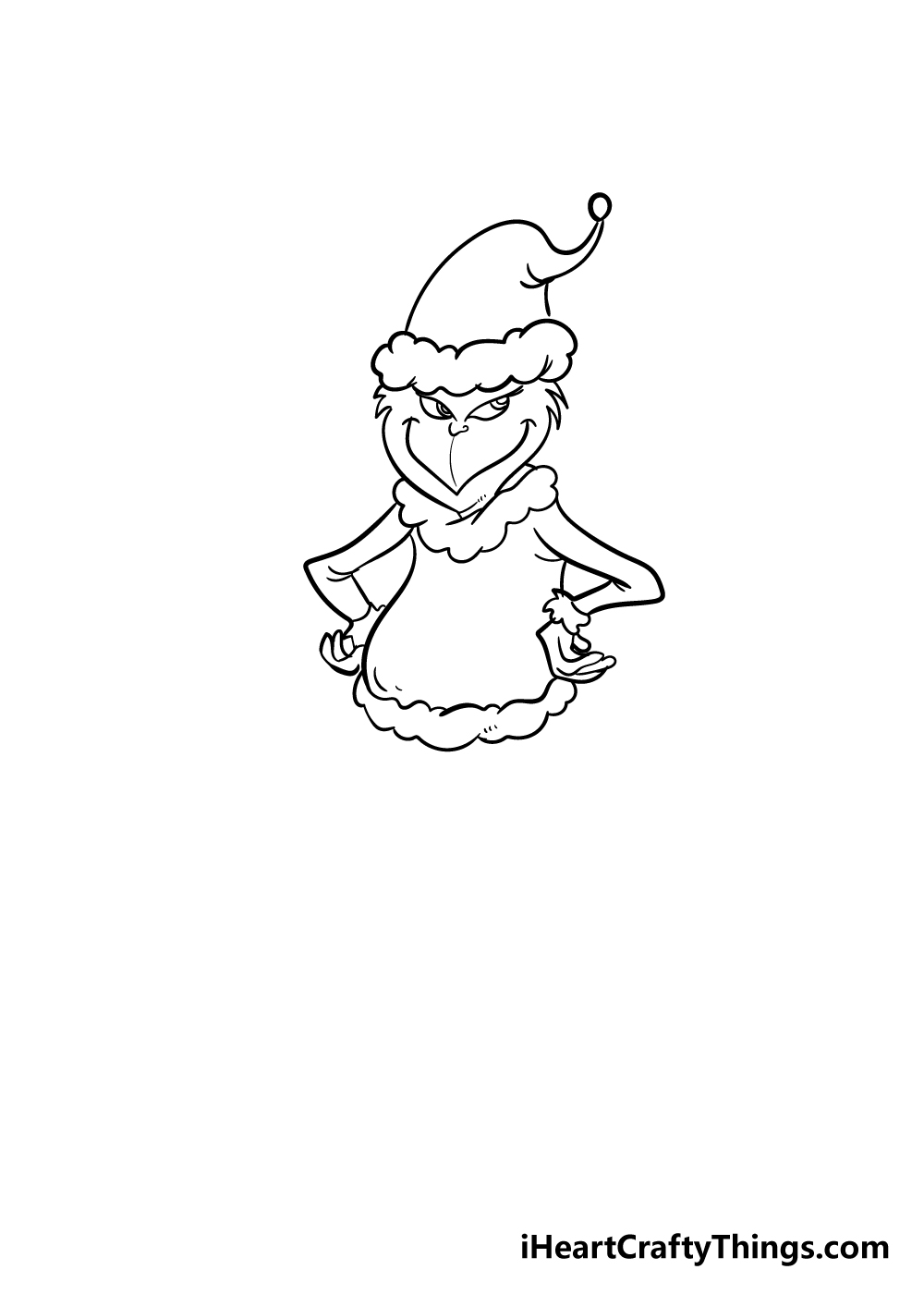 We will be drawing a belt for the Grinch in this step of our guide on how to draw the Grinch.

You’ll be using a shape similar to the one that you used for the base of his hat and collar in order to give it the fluffy appearance that those elements had.

Once you’ve drawn that belt section, you can add some lines to the arms and waist in order to give his suit some creases. 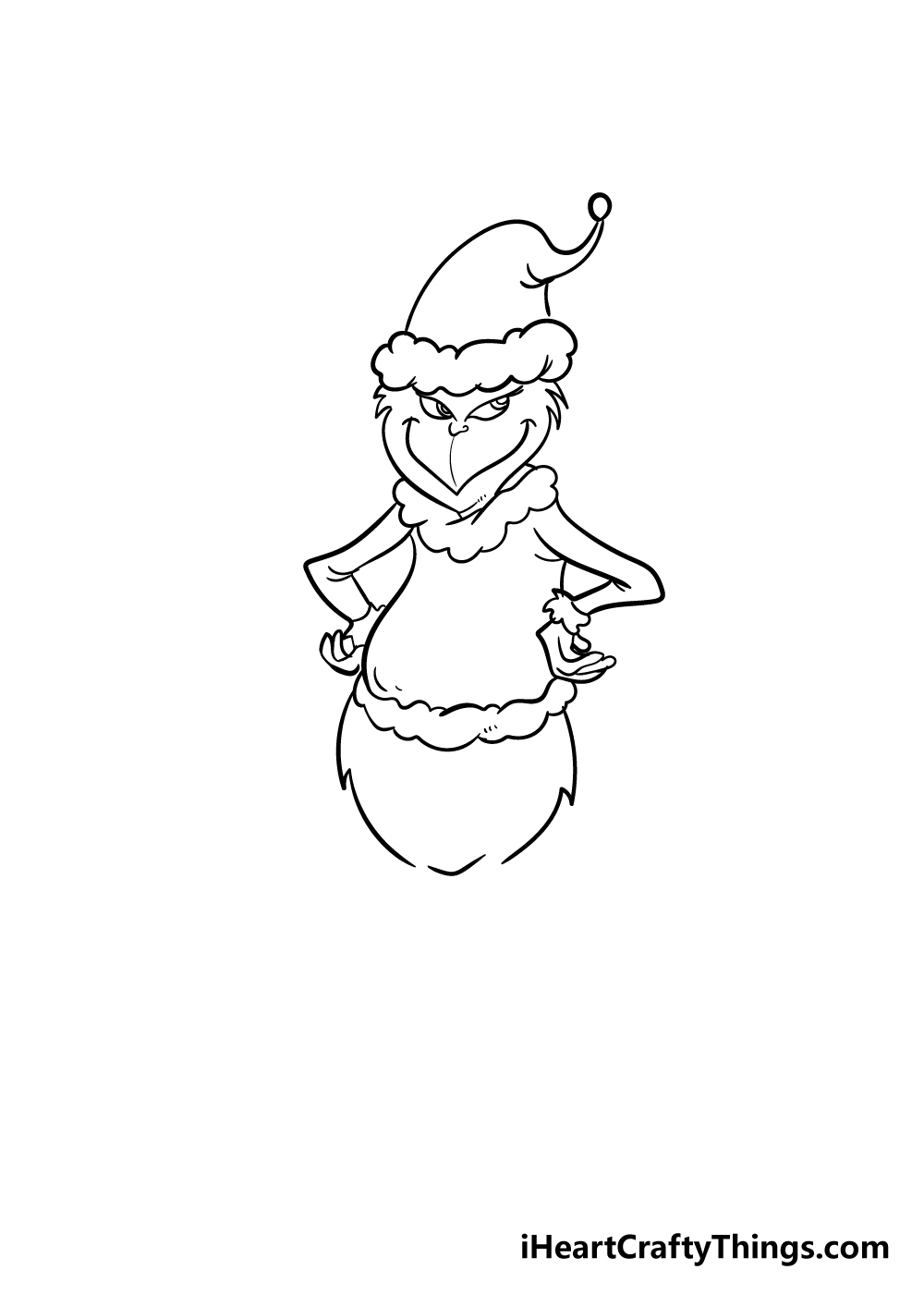 For the next aspect of your Grinch drawing, we will draw his fluffy hips.

These will be drawn with some curved lines coming down from his belt with some jagged lines in them to give a furry appearance.

Be sure to leave two small gaps near the bottom for when we draw the legs in the next step!

Step 7 – Finish off with the legs 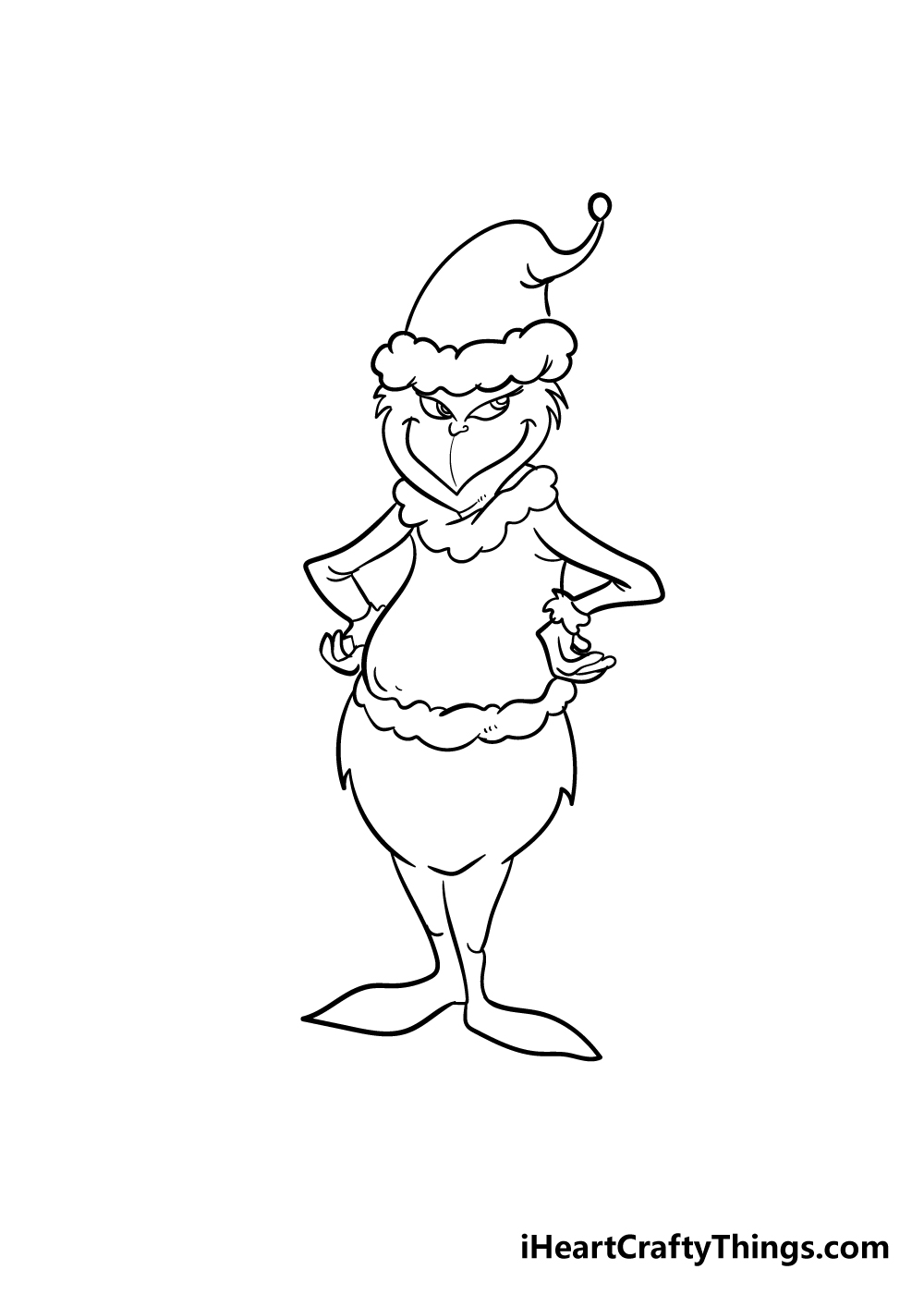 Step 7 of our guide on how to draw the Grinch will be about adding the legs before moving on to the coloring in!

His legs are quite short compared to the rest of his body, and as you can see in the reference image they are made of two sections.

You can use some curved lines down from his hips to create the tops of his legs. Then, you can draw his big, flat feet underneath some ankles.

With his legs drawn, you’re ready for the next step! Before you move on, though, be sure to draw any last details that you would like.

You could draw a beautiful background from your favorite scene in the book, or perhaps even draw in his little dog! What fun details can you think of for your Grinch drawing?

Step 8 – Now finish off your Grinch drawing with some color 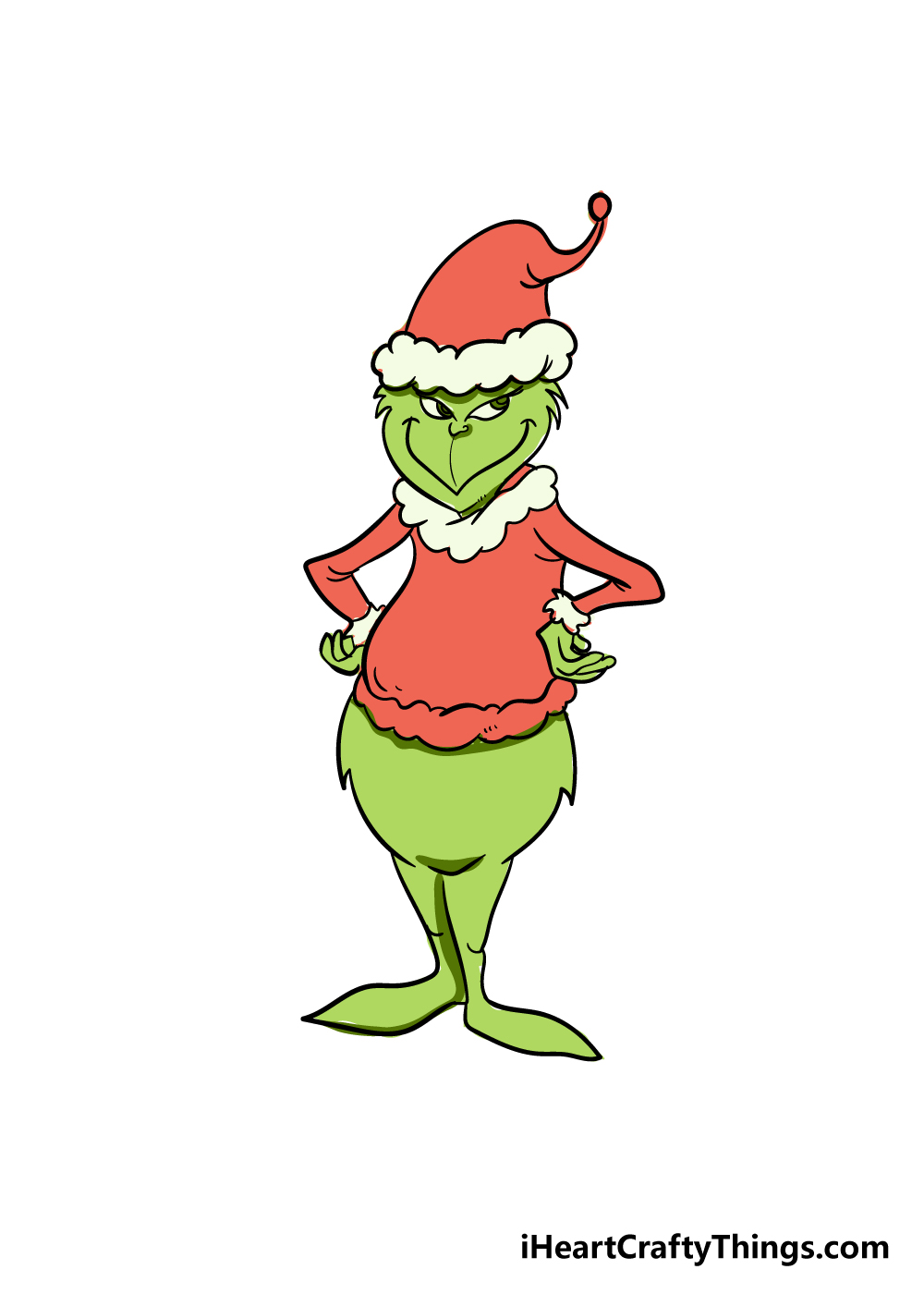 That brings us to the final step of your Grinch drawing! Now you get to have lots of fun coloring in your amazing picture.

The Grinch has a distinctive bright green color scheme with yellow for his eyes and of course some red for the Santa suit.

If you stick to his regular color scheme, I would use some acrylic paints or colored markers to make his colors pop!

That’s just one way of doing it, however, and you could also use more muted colors and mediums for your drawing.

Will you color in your Grinch with his traditional color scheme or will you switch it up with your own bright color choices?

5 Tips To Make Your Grinch Drawing Even Better!

Get your Grinch sketch ready for the holidays with these 5 fun tips!

We portrayed the main character of this story for this Grinch drawing, but there are many other characters you could add!

The story and its various adaptations feature many iconic and distinctive characters, and they would be fun to add here. You can look to the book and various film adaptations for inspiration!

Which of your favorite Grinch characters do you think would be best for this picture.

In addition to the famous characters of the story, there are also loads of iconic locations. These would also be great to use as a background for your drawing of the Grinch!

Adding a background would also open you up to add all sorts of amazing colors to your artwork. What favorite locations from the story would work best for the picture you have in mind?

Speaking of colors, that is a great way to bring some more flair to your picture! There are so many colors to take from the films and book, and you can really have a good time playing around with them.

Using different mediums can also be a wonderful way for you to make the colors even more interesting. Don’t be afraid to try out something unusual!

In this Grinch sketch, we depicted him in his famous Santa suit. It’s such a recognizable look for him, but don’t feel like you have to go for that look!

You could also depict him without the suit or maybe even give him a brand new look. It just depends on what you prefer, so have fun experimenting!

Lastly, we have mentioned a few times that the Grinch has gone through many iterations. This Grinch drawing shows him in his cartoon form, but you could change it to match different versions.

There is the live action version of the Grinch, as well as a recent CGI movie. These versions all have subtle differences, and so it would be easy enough to change this design into one of those!

Your Grinch Drawing is Complete

You have completed this step-by-step guide on how to draw the Grinch, and we hope that you had tons of fun doing it!

Drawing this classic character may seem difficult at first, but we hoped to show you that when you break it down into smaller, more manageable steps it can be easier than you think!

Now you can get creative with your drawing by adding more characters, some fun details, changing up his pose or by adding an incredible background!

How will you put your own spin on your picture?

There are lots of amazing step-by-step drawing guides already on our website for you to enjoy, and we upload more all the time! Be sure to check in frequently to never miss out.

We would also love to see your incredible Grinch drawing, so please be sure to share it on our Facebook and Pinterest pages once it’s done! 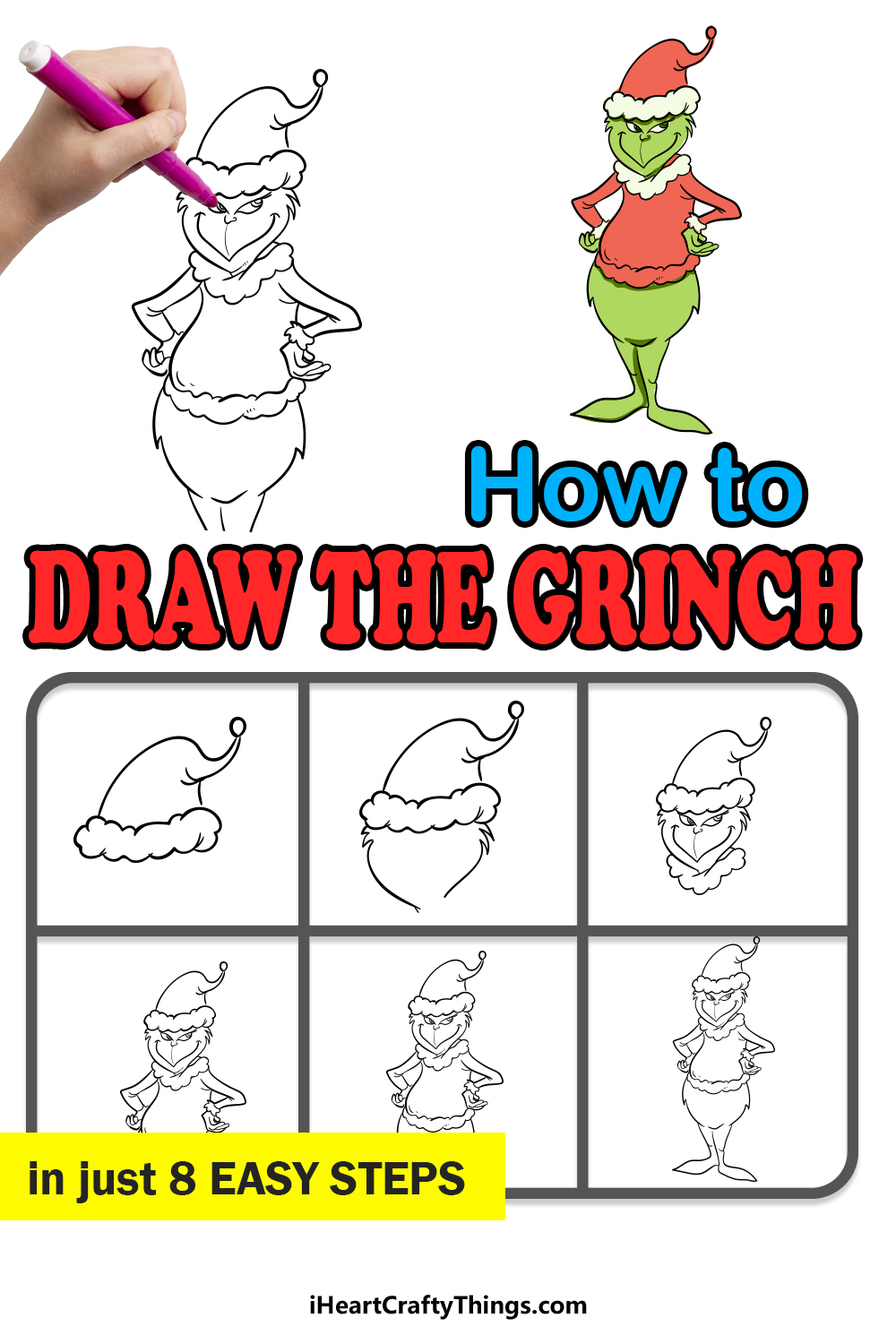 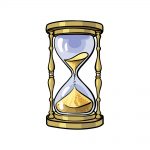