Search
Follow us
Menu
Follow us
My son wanted to do another pumpkin face decorating craft today and I was thrilled. This time we threw in some lacing practice with it. Although my oldest is a 2nd grader, he still jumped at the chance of doing this Pumpkin Face Lacing Practice activity with us and he really enjoyed it too. 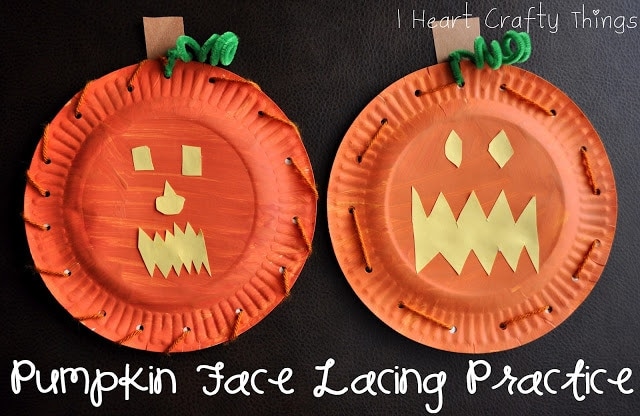 {This post contains affiliate links, read our Disclosure Policy for more information.}
HOW TO MAKE A PUMPKIN FACE WITH LACING PRACTICE
Supplies you will need:

1. Put your two paper plate together with the bottom of the plates facing out. Use your hole punch and carefully punch holes around the entire perimeter of the the plates, while holding them tightly together so the holes match up all the way around. 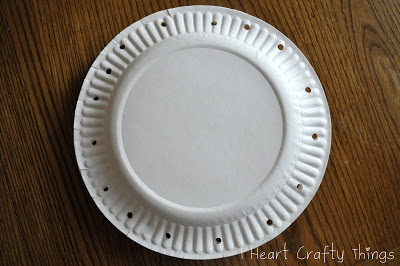 Since I knew my holes weren’t exactly the same distance all the way around, I made a pencil mark on the inside of the plates where the top hole was so we would know how to line them up later.

2. Next I gave the boys yellow and red paint on a separate plate. My son is reviewing colors in Kindergarten right now so I thought it was a good opportunity for them to practice mixing colors to get orange. After they mixed up their paint on their plate, they painted the bottom of both plates. You can ditch the color mixing and just use orange paint if you want.

3. While the paint was drying, I had them cut the eyes, nose and mouth for their pumpkin face out of yellow paper. We glued them onto one of the plates when they were dry. (One of my son’s didn’t want a nose, just a big, scary mouth!) 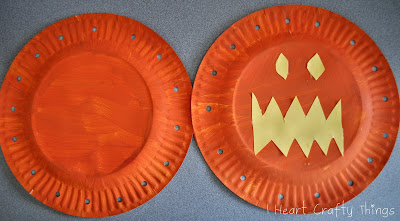 4. Line the plates up together, and start their lacing by putting a strand of orange yarn through the top hole of the plate and tying a knot at the top of the plate. Then the kids can have fun lacing the two paper plates together. 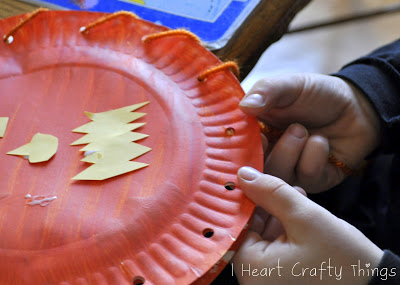 They both laced their pumpkins differently which was cool. You can see in the picture below that one plate is a darker orange and one is a lighter orange. I love how by them mixing the red and yellow together themselves, it gave them a unique color to their pumpkin. 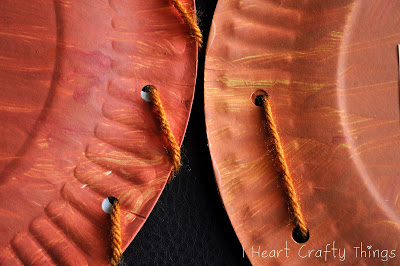 5. After lacing, I gave them a green fuzzy stick to put through a hole at the top, wrap it around itself to hold it in place, and then they wrapped the rest of it around their finger to make it curly. They also cut out their own stem from brown construction paper and glued it to the back of the pumpkin. 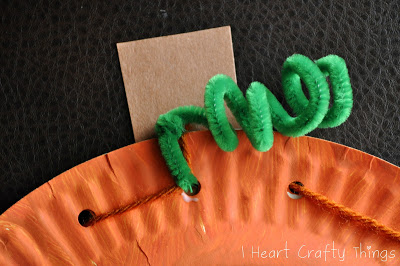 They turned out really cute!!

We paired this craft with Pumpkin Jack by Will Hubbell. 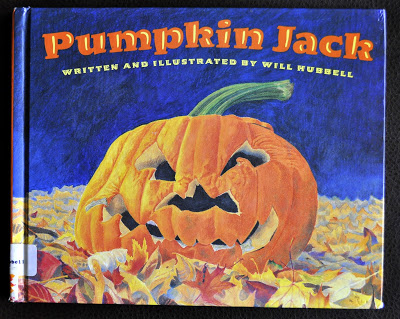 In the course of one year, Tim watches as his discarded jack-o-latern, Jack, decomposes, sprouts and finally produces more pumpkins in time for fall.

I love the illustrations in this book. I think they really help give children an understanding of the life cycle of a pumpkin. I think this year after Halloween we will throw our pumpkins in our garden area so the kids can see the changes and see if anything comes up next year. 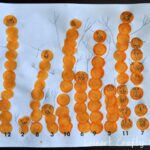 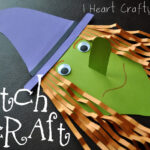