Of all the various cultural celebrations around the world, few can claim to be as colorful and unusual as the Dia de los Muertos holiday.

This name translates to Day of the Dead, and it originated in Mexico as a way to honor the dead.

It is usually a vibrant event full of life and color, and that contrasts with the imagery associated with death.

This event is now celebrated in many countries around the world, and learning how to draw Dia de los Muertos is a great way to show your appreciation for this incredible occasion.

This is the tutorial for you if you would like to know how you can do that!

Our step-by-step guide on how to draw Dia de los Muertos in 6 easy steps will show you how to create an awesome image based on this holiday. 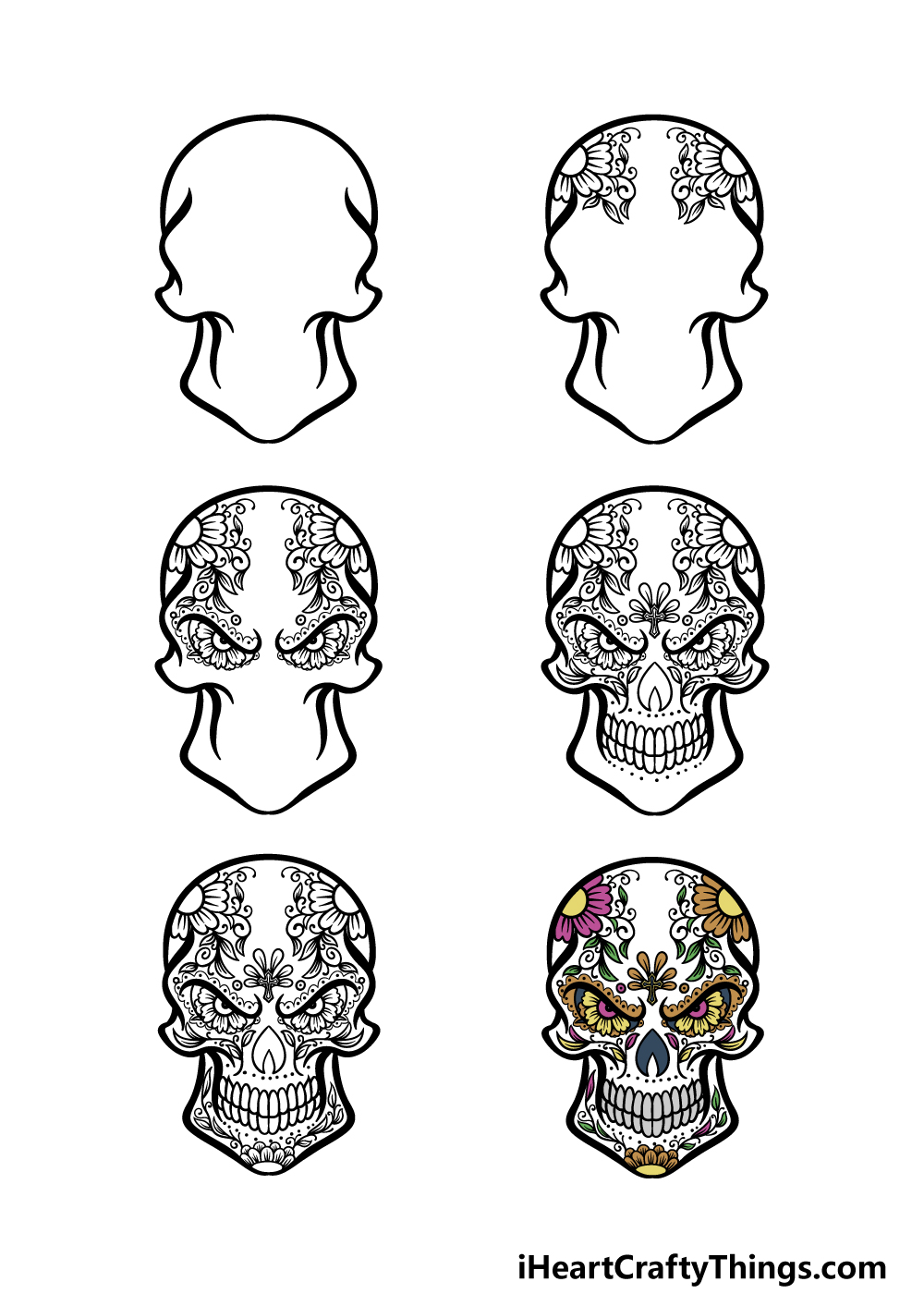 How to Draw Dia de los Muertos – Let’s Get Started! 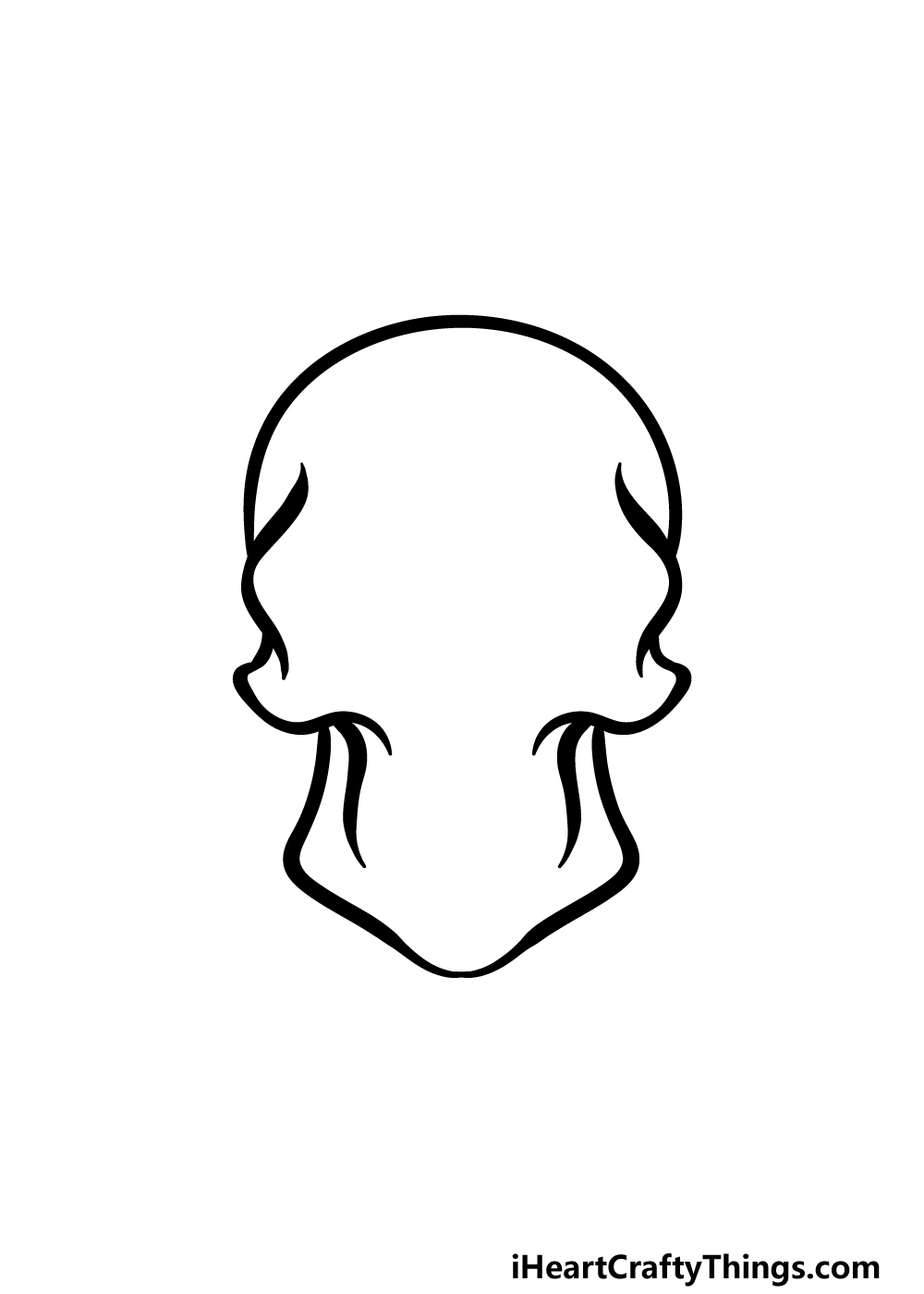 The image that is probably most closely associated with this holiday is probably the skull.

Many colorful ones called sugar skulls will often be crafted as commemoration, and we will be drawing a design based on sugar skulls during this guide on how to draw Dia de los Muertos.

This will be quite a stylized portrayal of these skulls, and we will start with the outline.

The outline of the skull will be drawn with several curved lines connecting to one another.

The skull will be quite angular in sections such as the cheekbones as well as the jaw, as shown in the reference image.

Try to replicate the outline as it appears in our reference image using some thick lines, and then we shall move on to step 2.

Step 2 – Draw some decorations on the skull 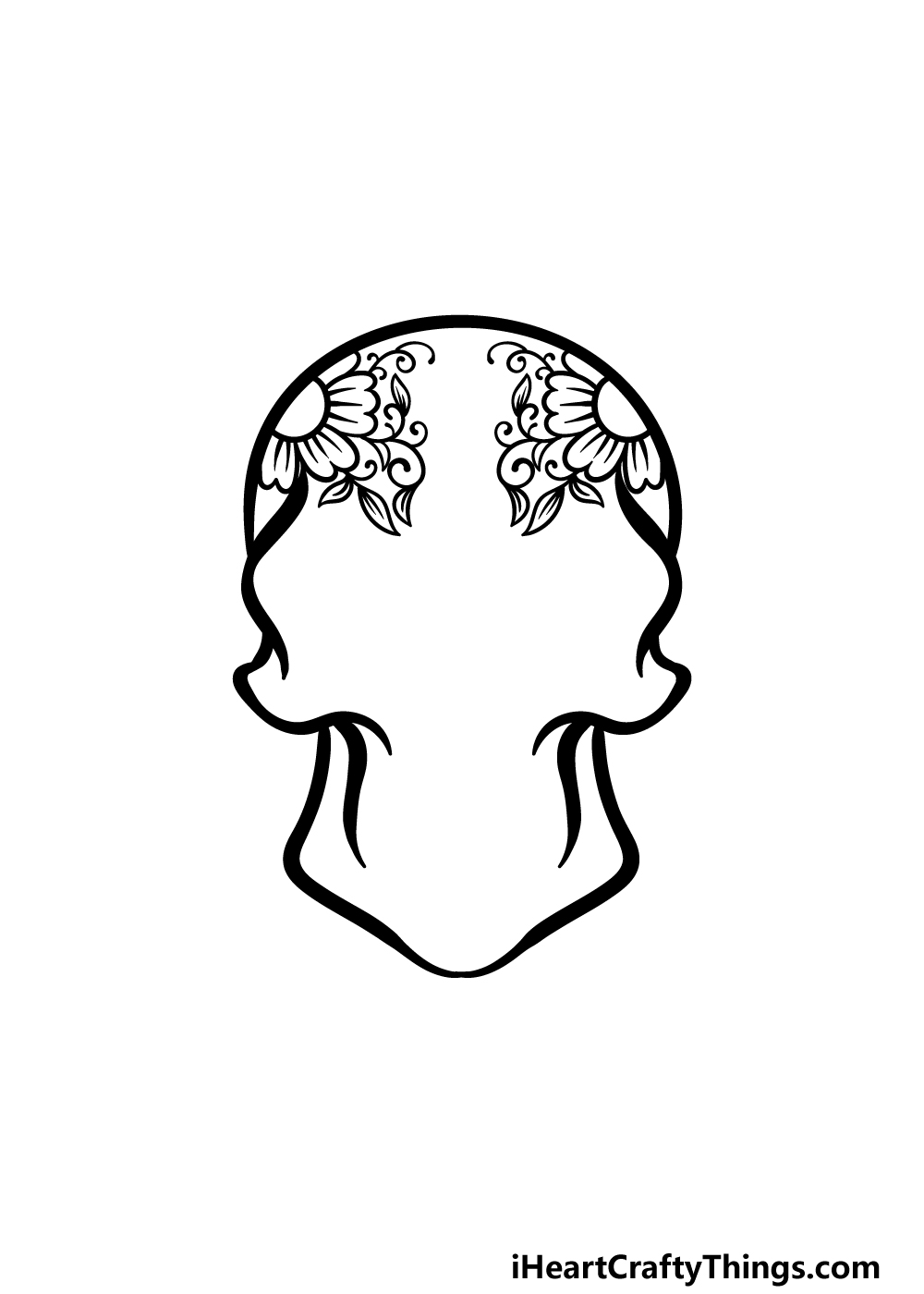 When decorating sugar skulls, there will often be floral designs on the skulls. We will be adding some floral designs to your Dia de los Muertos drawing in this next step.

The idea with this skull is to have the decorative elements be completely symmetrical.

This can be a bit tricky, so be sure to take it slow! We will be drawing these large flower designs on each side of the top of the skull as shown in the example image.

Once you have drawn these flower decorations, it will be time for the next step.

Step 3 – Now, draw the eyes of the skull 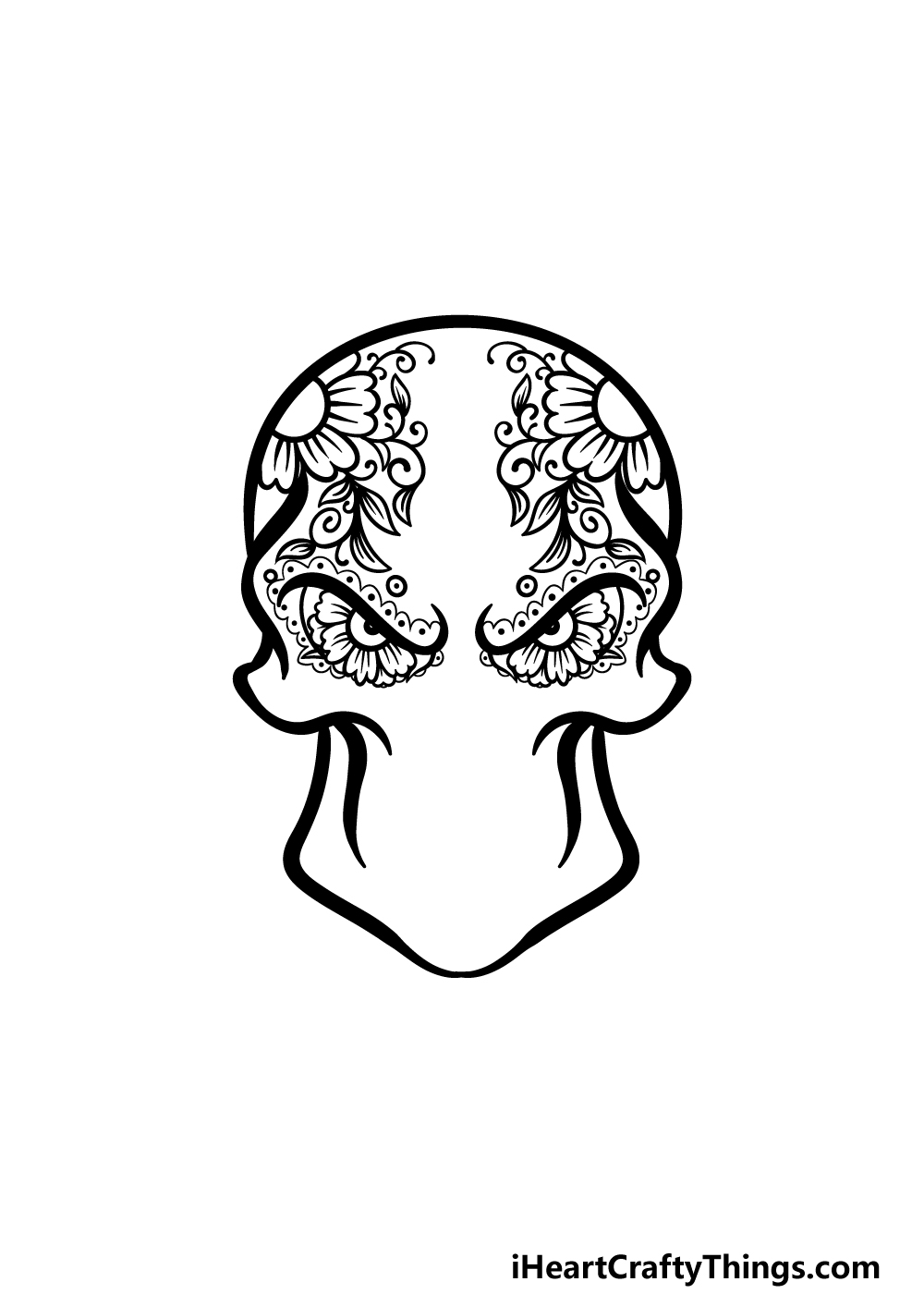 We have prepared a really cool design for the eyes in this step of our guide on how to draw Dia de los Muertos.

First, use some wavy lines for the eyebrows of the skull to create an intense expression. Once these are drawn, add some small circles beneath them and add a dot inside each one.

Then, we will be adding some petals around the circular eyes, and this will make the eyes look like they are made of flowers.

Add some more small details around the eye area, and then we can go to step 4.

Step 4 – Next, draw some facial details 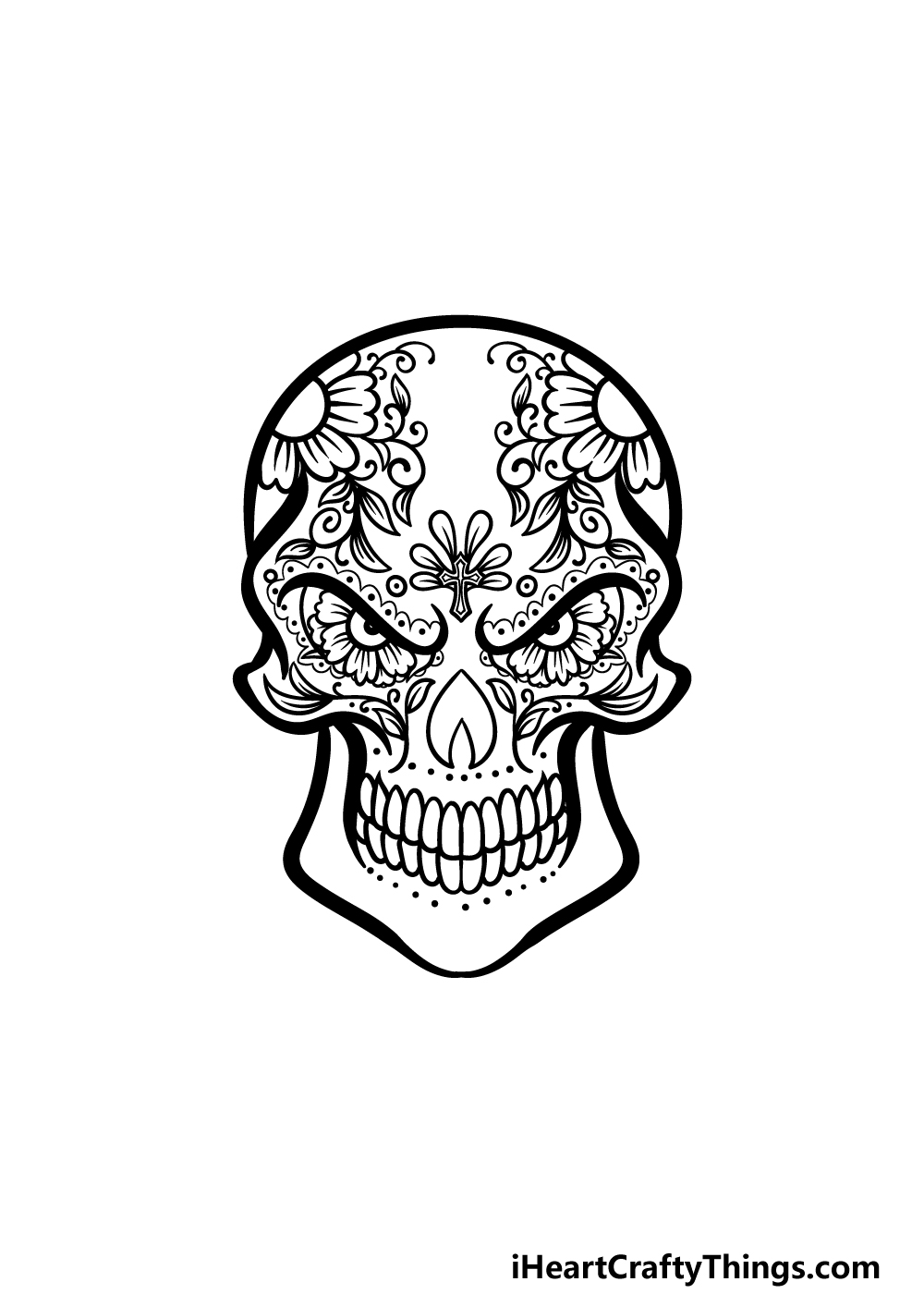 This part of your Dia de los Muertos drawing will see you adding a lot more of the facial details to the skull. First, draw a rounded shape with a pointy tip at the top for the nasal cavity of the skull.

Then, we will be drawing two rows of long, thin teeth to create the grinning mouth of the skull.

To finish off this step, you can add dots, line details and other small decorative details around all of these elements. Remember to try your best to keep things symmetrical!

Then, you will be ready for some final touches and details in the next step.

Now you’re ready to add the final touches in this step of our guide on how to draw Dia de los Muertos.

In this step, we will finish it off by adding some more decorative elements near the base of the jaw.

We added some more delicate floral designs for our picture, so you can draw these as well if you like the design.

You could also create a unique image with your own designs!

You could draw the skull outline from the first step and then fill it with your own details and designs to create an array of different skull designs. How will you decorate your drawing? 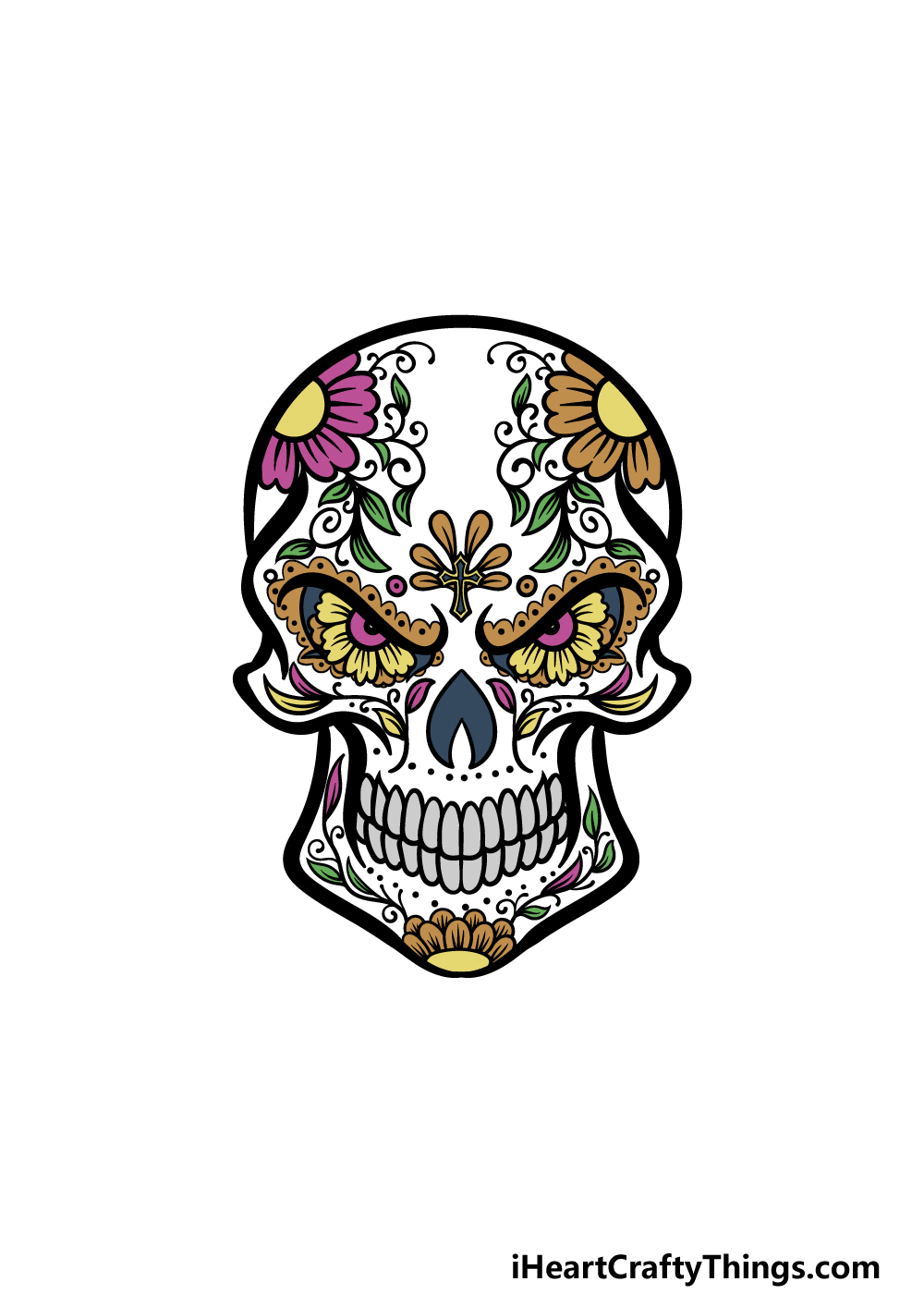 This final step of your Dia de los Muertos drawing gives you the chance to finish it off with some color!

Color is very important to the Dia de los Muertos celebrations, so this is your chance to have fun incorporating all of your favorite bright colors.

We used a nice variety of bright colors for the decorative elements of the skull in our example, but the good news is there are no wrong answers here!

The more colorful you make this skull, the better! That means you can really go wild expressing your creativity with some amazing colors.

Art mediums like colored pens and markers would be great for creating a vibrant look for the skull, but anything you use will look amazing!

Celebrate this iconic holiday with these tips for your Dia De Los Muertos sketch!

For the Dia De Los Muertos celebrations, you will see many sugar skulls like the one we created together. Some will be used as decorations while others will be worn as masks.

If you would rather make the skull in this drawing of Dia De Los Muertos more like a decoration, then that would be great as well! There are lots of details you could add around it if so.

You could draw some flowers for one idea, but what other small details could you add to turn this into a decoration?

Whether you make this a decoration or a mask, you could finish it off with a background. This could show a Dia De Los Muertos festival, or it could be a calmer, more laid-back setting.

You could also fill the background with patterns and shapes instead for a more stylistic approach.

Another way you could make this Dia De Los Muertos sketch even better would be by changing the design a bit. We created a beautiful pattern on our example, but you may want to personalize it a bit.

It’s all about expressing yourself, so you should feel free to incorporate any designs and ideas you may have!

When you have finished your Dia De Los Muertos drawing, there are a few different ways you can present it. For one idea, you could draw it on some folded cardboard in order to turn it into a card for someone.

You could also present it as a gift by framing it once it is done. Finally, you could even draw it on harder cardboard and then cut it out to turn it into a mask!

How else could you present it?

You have completed all of the steps in this guide on how to draw Dia de los Muertos, and you have finished with an incredible drawing to show for it!

There is an infinite amount of awesome Dia de los Muertos skull designs, and we hope that this guide made creating one of your own not only easier but also more fun to accomplish.

Now it’s up to you to show off what you can do! We went over a few ways that you could do this earlier in the guide.

These included creating new designs for the skull or using some creative colors, but these are just a few of the ideas you could go for! What else can you think of to finish it off?

There are many awesome drawing guides to enjoy on our website, so be sure to head on over for more drawing fun! We have more on the way soon, so be sure to keep checking in frequently. 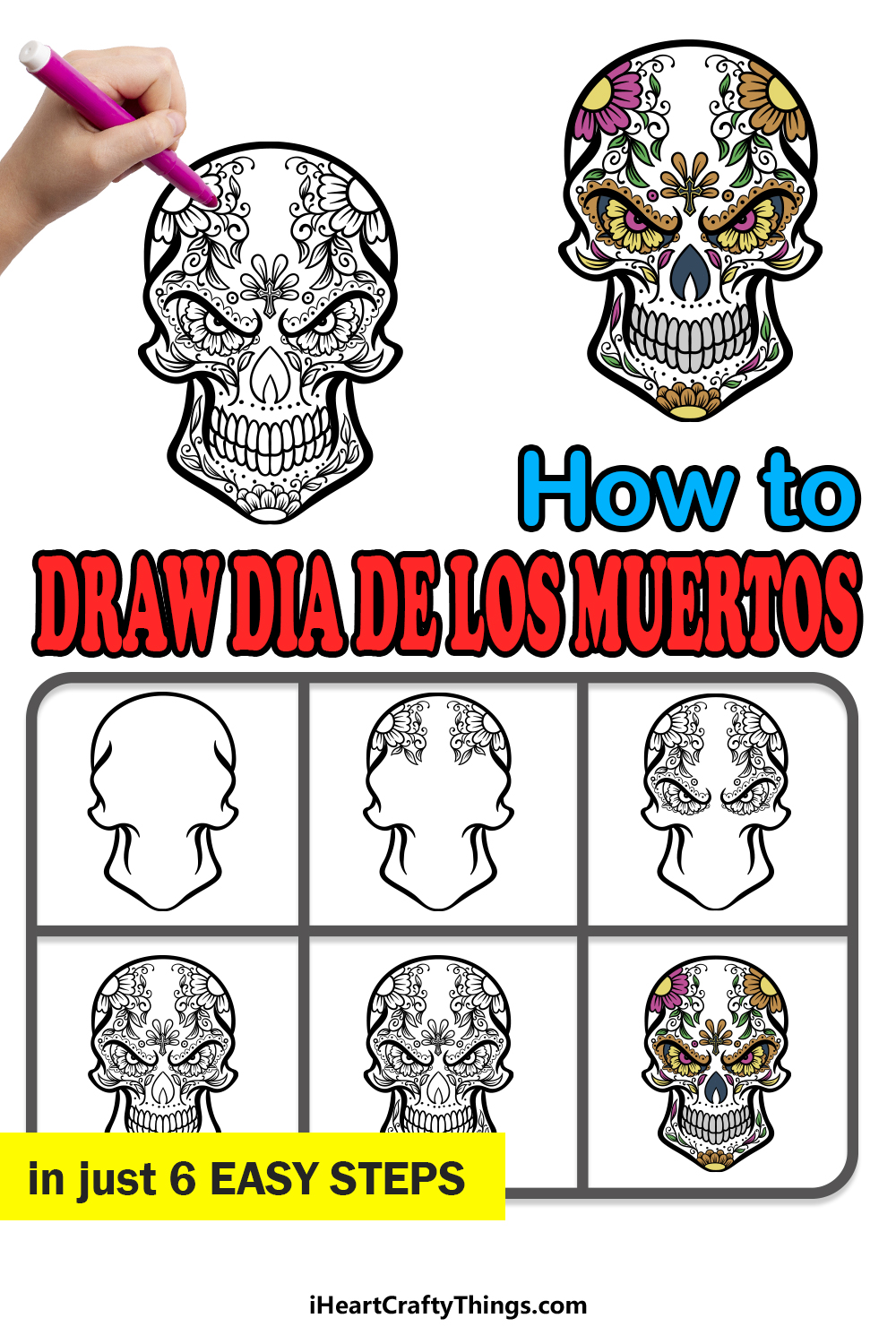 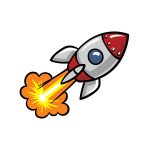 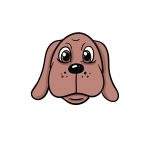