The German Shepherd is a medium to large dog breed that originated in Germany, as its namesake suggests. This dog typically has long, pointed ears and a medium-length, bi-colored fur coat.

German Shepherd dogs are particularly known for their intelligence, courage, and loyalty to their owners.

Because of their gorgeous physical features, they are an extremely appealing subject to draw. Thus, it has created a huge demand for a free German Shepherd drawing tutorial. 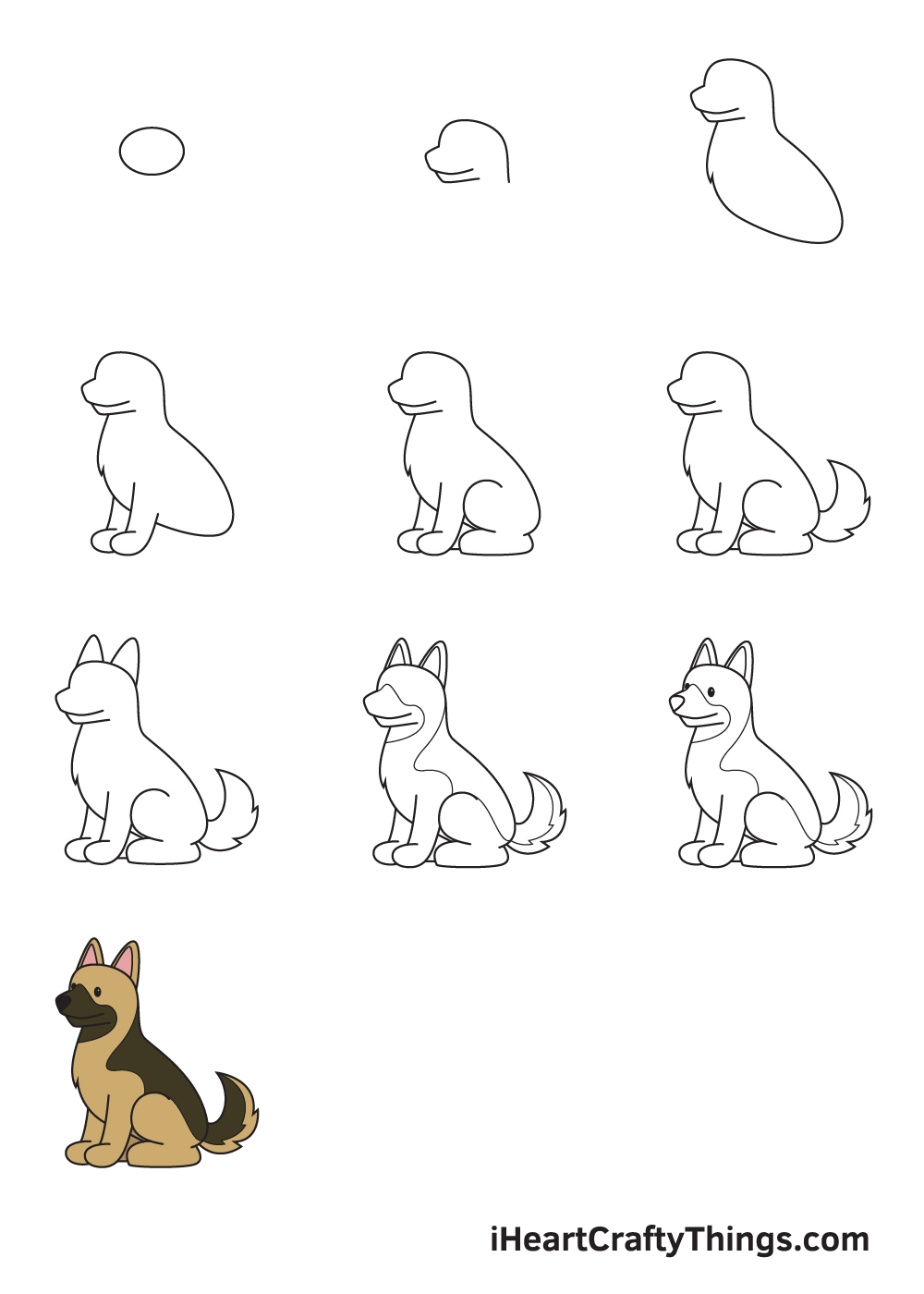 You’ve asked for it, so we delivered. Finally, we present to you—a step-by-step tutorial on how to draw a German Shepherd in a nutshell.

This tutorial consists of 9 easy and simple steps that come with visual illustrations.

All you need is a piece of paper along with your favorite drawing tool and you’re good to go! Have fun putting your imaginary pet dog into paper!

How to Draw a German Shepherd – Let’s get started!

Starting on the upper left portion of your paper, draw a sideways oval shape to outline the head of your German Shepherd.

In order to make sure that your German Shepherd will be drawn proportionally, create reference lines by drawing an intersecting horizontal and vertical line across your paper.

These lines should divide your paper into four square spaces. The one on the upper left is where you should draw the oval shape.

Step 2 – Outline the Head of the German Shepherd

Using the oval shape we previously drew, structure the German Shepherd’s head by drawing the top of its head as well as its snout.

Right underneath the head, draw the body of the German Shepherd. You can structure the body any way you want, and make it as thick or as thin as you want.

Make sure to draw a clump of fur on some part of the dog’s body to add texture and make it appear more realistic.

Step 4 – Afterwards, Draw Both of its Front Legs

Draw a leg on each side below the chest of the German Shepherd. Don’t forget to draw a disk-like shape at the bottom of each leg to create the paws!

Afterwards, get rid of the lines overlapping in the legs using an eraser to keep your drawing neat and tidy.

After drawing the German Shepherd’s front legs, we will now be working on its hind legs.

Create the hind legs of your dog by drawing a curved line with a folded leg right underneath at the bottom of its body.

Bear in mind that since the dog is facing sideways, only one leg is going to be visible.

Step 6 – Add a Furry, Fluffy Tail to its Body

On the bottom portion of your German Shepherd’s back, structure the tail by drawing connected pointed clumps of fur to make the tail appear fluffy!

We think a furry tail looks best when drawing a German Shepherd, but feel free to draw the tail any way you like!

Draw an upside down V-shaped line on each side above its face to create a pair of upright tapered ears.

The standing pointed ears, as seen in the illustration, is actually one of the most distinctive features of a German Shepherd.

However, don’t let the norm stop you from customizing the structure of its ears. You can absolutely draw folded ears, droopy ears, or any form of ears you like!

Step 8 – Add Patterns and Marks All Over its Coat

German Shepherd dogs typically have more than one color, so we will be drawing lines all over its body to help us in coloring its coat later on.

Step 9 – Finish Off by Drawing the Facial Features

Finalize your German Shepherd artwork by drawing its eyes, nose, as well as the outline of its inner ear.

Starting from top to bottom, draw an upside down V-shaped line parallel to the outline of the German Shepherd’s ears.

Next, draw a pair of eyes right below its forehead. Now, complete its facial features by drawing a half upside down triangular shape on its snout to form the nose.

Now that we have successfully drawn a German Shepherd, all it’s missing is a splash of colors to make your drawing vibrant and colorful!

Finally, we’re now in the most fun and exciting part, which is choosing the colors and coloring your drawing! This is the part where you can show off your artistic skills and your ability to mix and match various colors.

German Shepherd dogs are generally black, grey, or sable in color. There are also some with a combination of the colors black and tan, red and black, and black and silver.

This gives you a lot of color options when coloring your drawing. And while you’re at it, why not try experimenting with different coloring materials as well?

Enjoy coloring your German Shepherd and watch as your drawing ultimately comes to life!

Find out how to make this German shepherd drawing even more amazing!

The cartoon style of this German shepherd sketch is really cute! If you want to really challenge yourself, you could try to draw a more realistic rendition.

To do this, try looking up some photos of German shepherds, and then use these photos to help you with the details.

The ears, paws, facial details and body shape would be the most important aspects to change. If you know someone who has a German shepherd, that would be even better!

Whether you stay with this style or make it more realistic, we think this cute dog deserves some toys. You could draw all kinds of fun dog toys beside it for it to interact with.

Maybe you could draw a ball, a small rope toy or maybe a squeaky toy. Instead of toys, drawing objects like a food bowl or a water bowl would also be options.

Any of these would add some more details to admire in this German shepherd drawing. They would also give you the chance to add lots of color!

If you have more favorite dog breeds, we think it would be cute to add them to this drawing of a German shepherd.

For example, maybe you love poodles! By looking up some pictures or using a real one, you could draw one done in a similar style to the German shepherd.

You don’t need to stick to just one, and you could draw a crowd of cute dogs. What are some breeds you would add to this image?

Lastly, we would recommend drawing a background for this one. There are so many places a German shepherd could be, from a backyard to a fun dog park.

These are some more conventional ideas, but you could also get more creative with it. Maybe the German shepherd could be at a dog party with those other breeds you may have added in the previous tip! What are some fun background ideas you have for this drawing?

Your German Shepherd Drawing is Complete!

This is definitely an enjoyable activity for anyone who loves dogs or animals in general.

We are regularly uploading brand-new drawing tutorials, so make sure you keep re-visiting our website so you can keep learning how to draw something new.

If you’ve enjoyed this tutorial, check our drawing tutorials’ catalog to learn how to draw other breeds of dog like huskies!

Once you’ve successfully drawn a German Shepherd and colored it, we’re sure you must be feeling proud of yourself—as you should be! Make sure to show off your work of art by sharing it on our Facebook page and Pinterest.

We can’t wait to see your charming German Shepherd drawing! 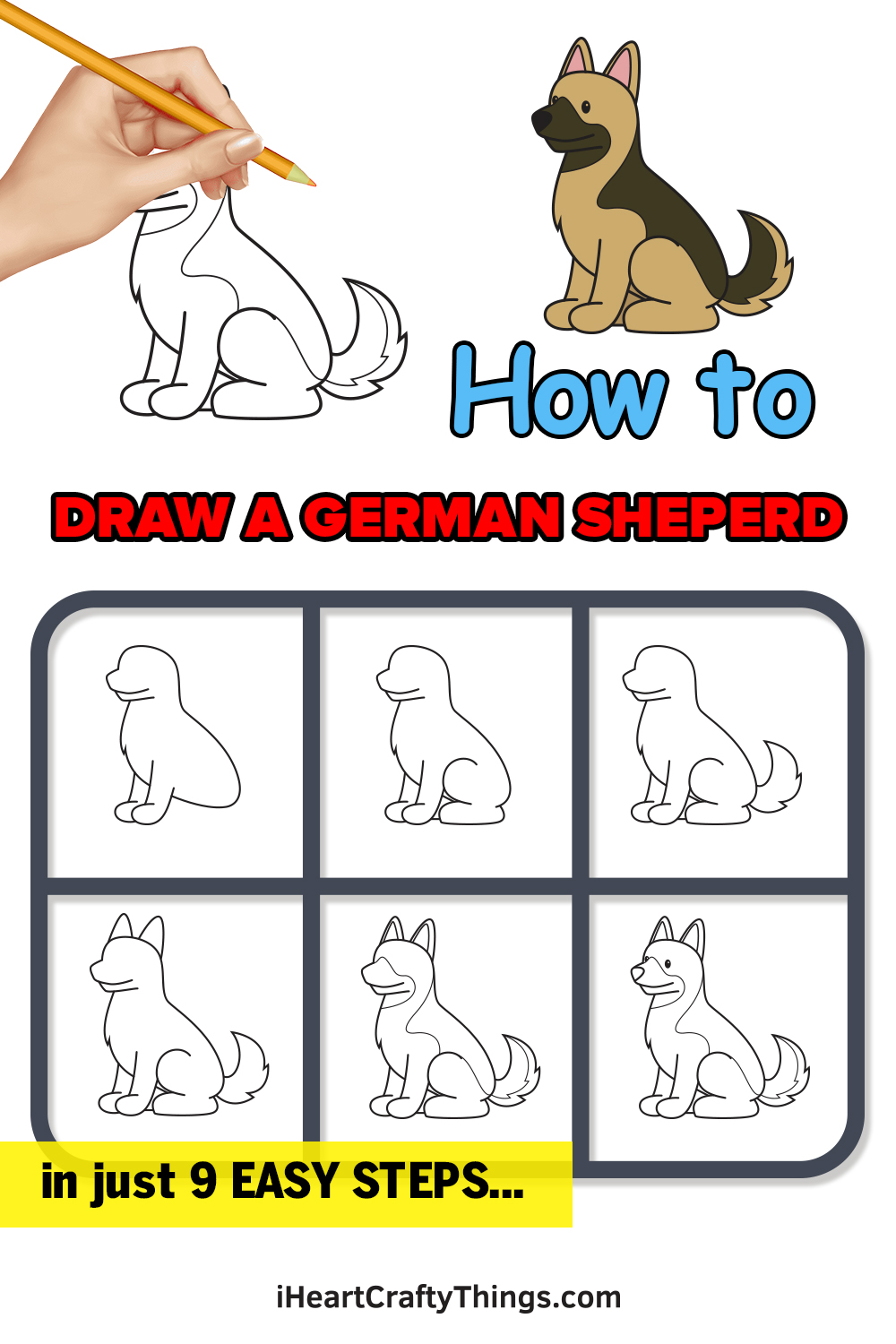